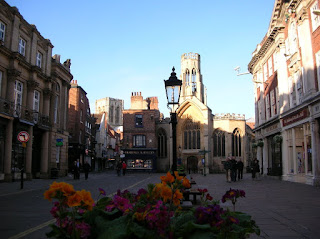 York is a walled city, situated at the confluence of the Rivers Ouse and Foss in North Yorkshire, England.

York's location on the River Ouse, in the centre of the Vale of York and half way between the capitals of London and Edinburgh means that it has long had a significant position in the nation's transport system.

In September York has an annual Festival of Food and Drink, which has been held in the city since 1997. The aim of the festival is to spotlight food culture in York and North Yorkshire by promoting local food production.The Festival generates up to 150,000 visitors over 10 days, from all over the country. One of the notable local products is York ham, a type of boiled ham, which is a mild-flavoured ham that has delicate pink meat and does not need further cooking before eating. It is traditionally served with Madeira Sauce. It is a lightly smoked, dry-cured ham, which is saltier but milder in flavour than other European dry-cured hams. Folklore has it that the oak construction for York Minster provided the sawdust for smoking the ham. Robert Burrow Atkinson's butchery shop, in Blossom Street, is the birthplace of the original “York Ham” and the reason why the premises became famous.

In the centre of York, in St Helen’s Square, there is the York branch of Bettys Café Tea Rooms. Bettys founder, Frederick Belmont, travelled on the maiden voyage of the Queen Mary in 1936. He was so impressed by the splendour of the ship that he employed the Queen Marys’ designers and craftsmen to turn a dilapidated furniture store in York into an elegant café in St Helen’s Square. A few years after Bettys opened in York war broke out, and the basement ‘Bettys Bar’, became a favourite haunt of the thousands of airmen stationed around York. ‘Bettys Mirror’, on which many of them engraved their signatures with a diamond pen, remains on display today as a tribute to them.

There are many famous food takeaways in York such as Dixy Chicken, Alishaan and York Tandoori.
Posted by Food Guru at 22:04