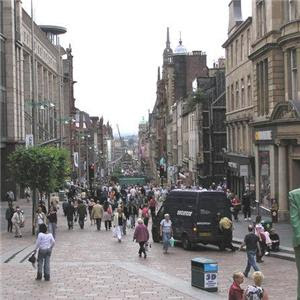 Glasgow is the largest city in Scotland and third most populous in the United Kingdom. The city is situated on the River Clyde in the country's west central lowlands.

From the late 1980s onwards, the Merchant City has been rejuvenated with luxury city centre apartments and warehouse conversions. This regeneration has supported an increasing number of cafés and restaurants. The area is also home to a number of high end boutique style shops and some of Glasgow's most upmarket stores.

Glasgow's West End refers to the bohemian district of cafés, tea rooms, bars, boutiques, upmarket hotels, clubs and restaurants in the hinterland of Kelvingrove Park, the University of Glasgow, Glasgow Botanic Gardens and the Scottish Exhibition and Conference Centre, especially on the area's main thoroughfare, Byres Road, and on Ashton Lane. The area is popular with tourists, and contains many hotels in Scotland, including the prestigious One Devonshire Gardens, which has accommodated a number of celebrity guests on visits to the city.

As well as traditional restaurants, there are neat choice of food takeaways in Glasgow. Be it a Chinese takeaway or pizza takeaway - there's something for everyone. You might want to try these popular choices with locals: Yo Sushi takeaway in Pollok, New Golden Bell takeaway in Partick.
Posted by Food Guru at 14:44